Diana Stapp currently serves as the City Secretary for the City of League City. She is responsible for the administration and retention of ordinances and City Charter, agendas for public meetings, and open record requests.

Stapp joined the League City team as executive secretary in 2002. She became City Secretary in August 2011. She previously served as records supervisor and deputy city secretary.

Stapp is a member of the Texas Municipal Clerks Association. 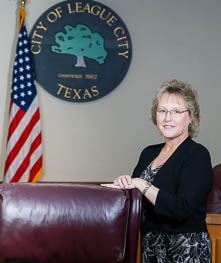