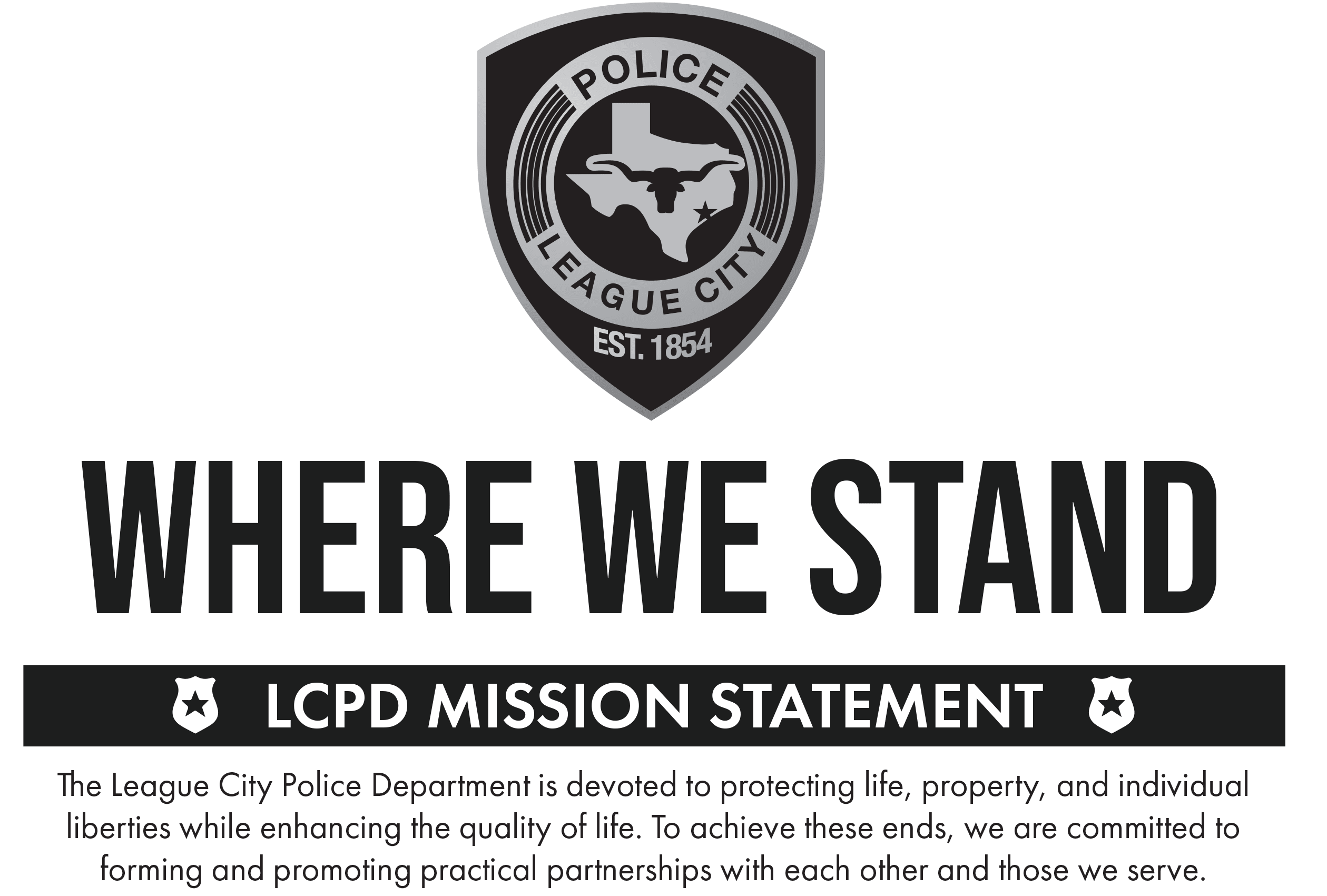 LCPD is also committed to working together with citizens and forming lasting relationships with businesses and residents of League City. Our officers are directly involved within the League City community in many areas, and continually invite citizens to participate in cooperative programs like the Citizen Police Academy, Volunteers in Policing, Citizens on Patrol, and more.

In order to provide exceptional services to our community, the police department maintains stringent eligibility and selection standards, and our recruiters search nationwide for top applicants. To learn more about eligibility requirements and what it takes to become a League City police officer click here.

The League City Police Department believes that well-trained officers are not only safe officers, but also provide a higher level of service to the citizens of League City. Training is a top priority for our department, and our officers regularly exceed the state’s mandatory training requirements.

All League City police officers are regularly trained in:

Outside of this mandatory training, in 2019 -2020 the League City Police Department required its officers to complete quarterly assigned training, which included topics like implicit bias, racial profiling, cultural awareness and diversity, distracted driving for law enforcement, and eyewitness identification.

The League City Police Department values a relationship of trust with the citizens we serve. To ensure concerns regarding ethics and integrity are properly investigated, our Office of Professional Standards reports directly to the Chief of Police. The department will investigate all incidents of alleged misconduct brought to its attention within that 180 days from the time the incident occurred. The League City Police Department is a civil service police department governed by the Texas Local Government Code Section 143, which sets the standards for investigating complaints.

In the event an officer uses force of any kind they are required to fill out a Use of Force Report, which is reviewed by a supervisor to ensure compliance with the department’s policies. If there are apparent violations for the use of force provided, the supervisor will initiate an administrative investigation. The department also has a Use of Force Board that meets semi-annually and is composed of officers, trainers, and supervisors. The board members are well-educated in use of force policies, including weapons of non-lethal force like O.C. spray (pepper spray) batons, and tasers. The Use of Force Board will review all Use of Force Reports and provides an additional source of compliance accountability.

Along with those accountability measures, LCPD utilizes the Use of Force Continuum. This is a guideline that provides officers with a series of tactics and strategies to use when trying to resolve a situation. Following these guidelines helps ensure that under no circumstances will use of force used be unreasonable, and in no instance will deadly force be used except when authorized by the department’s policies and the laws set forth by the State of Texas.

Feel free to review the department's use of force policy (PDF).

In 2001, we installed dash cameras in all our patrol units. In 2020-2021, we are upgrading our program to include body-worn cameras for all of our officers. This upgrade will also include new dash cameras. While in police uniform or performing a police function, officers will wear and activate their assigned body camera, per policy.

The League City Police Department voluntarily complies with 166 Texas Law Enforcement best practices in accordance with the Law Enforcement Recognition Program created by the Texas Police Chiefs Association. This program is a voluntary process allowing Texas police agencies the opportunity to meet criteria developed by Texas law enforcement professionals. Since 2006, only five percent of Texas law enforcement agencies have met the standards required to be recognized through this program. Fulfilling these requirements reduces risk and liability, assists agencies in the efficient and effective delivery of services, and protects the rights of individuals.

It is important that LCPD provides the best possible service to citizens while remaining transparent. If you have witnessed exceptional service or believe you have been subjected to police misconduct of any type, you are encouraged to report the incident to the League City Police Department.