Birds of a Feather

You know the old saying, “Birds of a feather flock together,” right? We usually think it refers to birds of the same species staying together, but in the case of Red-winged Blackbirds, it’s even more accurate. Let’s take a closer look at this fascinating species, and I’ll show you what I mean.

Red-winged Blackbirds are normally seen traveling together in large flocks. In fact, their genus name Agelaius derives from the Greek word meaning “belonging to a flock.” If you’ve been out just before dusk recently, you may have witnessed a mesmerizing flocking behavior known as a murmuration. In this amazing spectacle, thousands of blackbirds fly en masse in perfect synchronization, creating swirling, shape-shifting black clouds in the sky. After coming down to roost overnight, these huge flocks spread out as far as 50 miles foraging before rejoining the other members in the evening.

In smaller flocks, Red-winged Blackbirds can be recognized by their distinctive undulating flight pattern, with rapid wing beats interspersed with short glides. Another behavior helpful in identification can be seen as flocks are landing: as the birds in the front light, the birds in the back fly over them to land in the front, creating a leap-frog effect.

Males and females of this species are dimorphic, meaning they look different from each other. Males are glossy black all over, and easily recognized by their large, bright red and yellow shoulder patches (or epaulets) – the older and more experienced the bird, the more impressive the wing patches. Females are much smaller, brown, and heavily streaked, with a noticeable whitish eyebrow. They look like an entirely different species, and for that reason are often confused with sparrows. 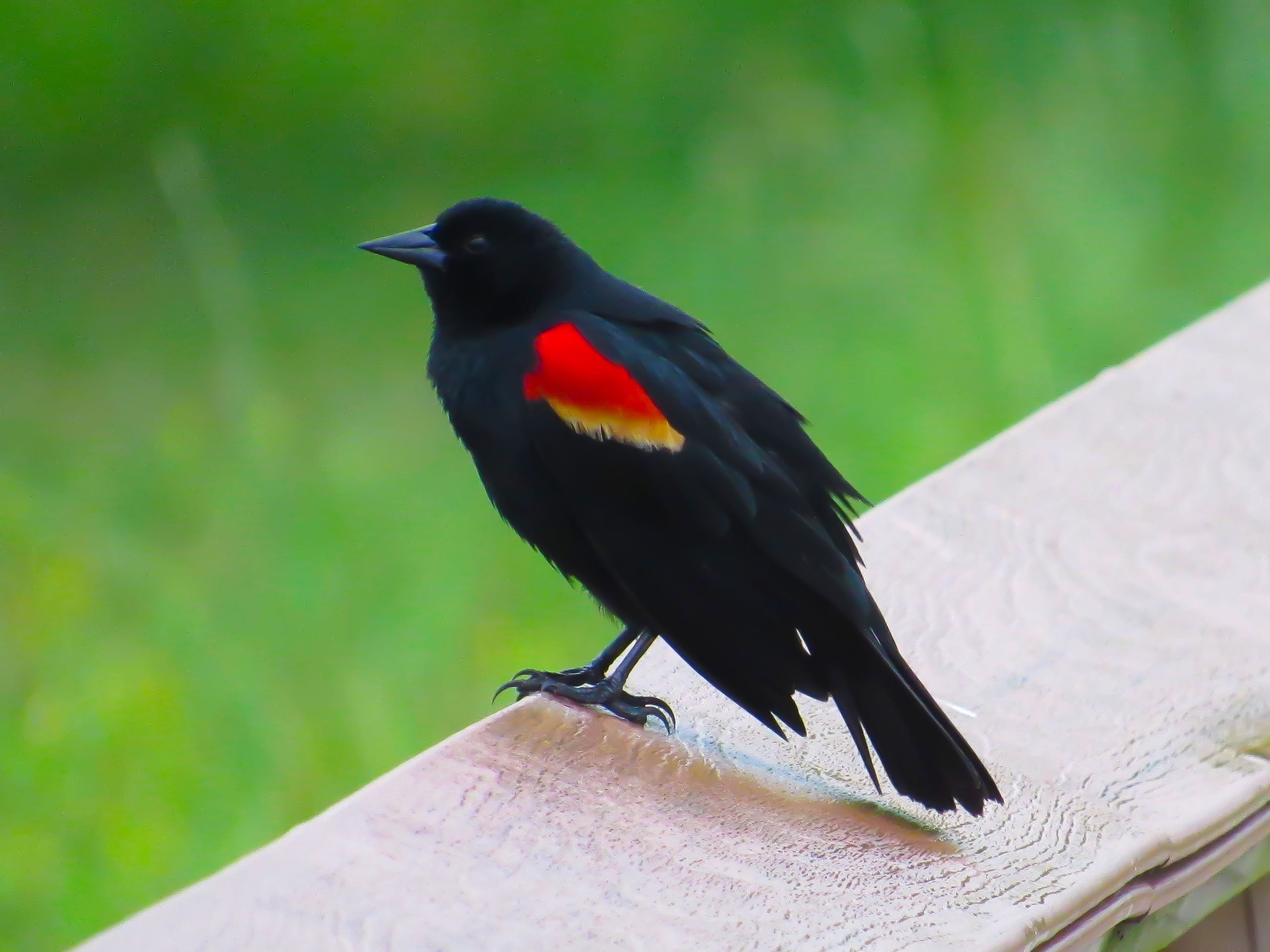 This time of year, when our resident population is joined by migrants from up north, identification is made even more difficult because males and females tend to flock separately. Males migrate before females in the spring, and after them in the fall. This means that even within the same species, birds with the same plumage flock together, apart from the rest! 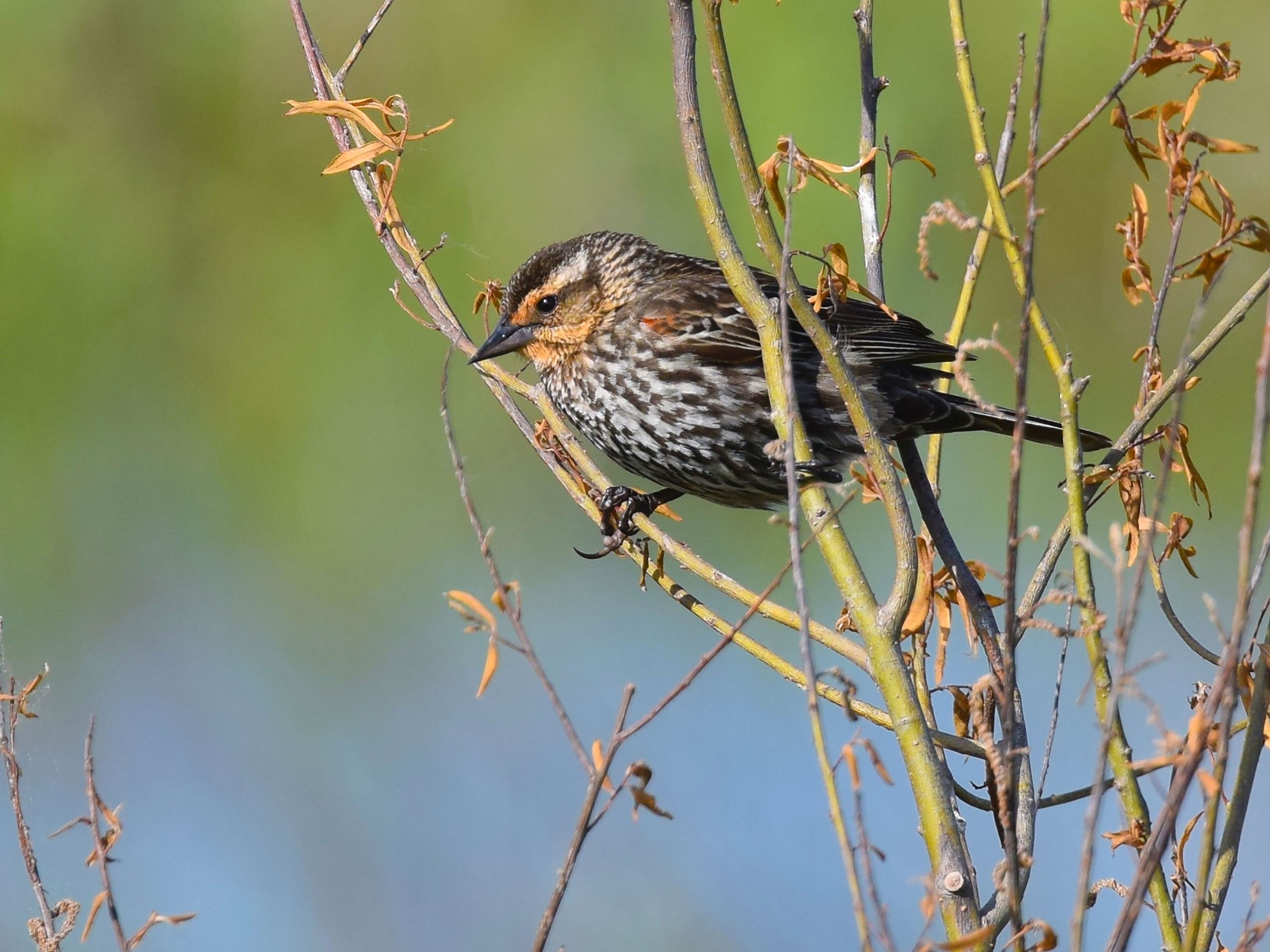 During breeding season, males perch high atop cattails and reeds, singing loudly while flashing their bright red epaulets. Females are more likely to be seen on the ground, foraging, and gathering nesting material. Red-winged Blackbirds nest in loose colonies in both fresh- and salt-water marshes. Due to the scarcity of appropriate habitat, males are polygamous, with as many as a dozen nesting mates crowded into one small territory. For this reason, the males’ flashy displays are not meant to attract females, but rather to defend their territories against other males. Once nesting has begun, the males shift their attention to defending the nests against predators.

Throughout the summer, the Red-winged Blackbird’s diet is largely made up of high-protein pest insects, such as weevils, corn worms, caterpillars, grasshoppers, and flies. During the rest of the year, they feed heavily on seeds and grains, making them an unwelcome visitor around farmers’ crops. When resources are abundant, two to three broods are common.

Females build new nests for each brood, creating intricately woven nests within the reeds, and lining the cups with mud and soft grasses. Nests are placed a few inches above the water surface to protect eggs and nestlings from predators. Unfortunately, this makes them susceptible to spring heatwaves and large flooding events such as the one we experienced in late 2017 with Hurricane Harvey. Our local population was reduced to around 10% of its normal size, and marshes once filled with the cheerful sounds of Red-winged Blackbirds were eerily quiet. I’ve been very happy to see the species rebounding in our area in recent years, and to once more hear their bubbly songs and enjoy their flashy displays.

If you’d like to attract Red-winged Blackbirds to your yard, try scattering some birdseed on the ground – they love millet, cracked corn, peanut hearts, and black oil sunflower seeds. You can purchase pre-mixed premium seed at the store, but I enjoy creating my own special mix. Either way, your yard is sure to be a popular spot with these beautiful birds!