How League City Animal Care never gave up on an extreme abuse case, and paved the way for a happy ending.

In November 2019, League City Animal Care (LCAC) discovered a heartbreaking case of animal abuse. “When we found him, he was outdoors in a kennel 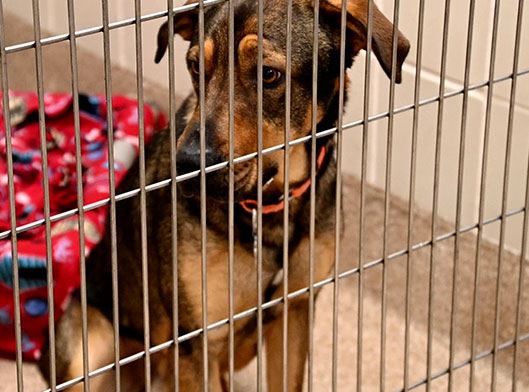 several sizes too small. He couldn’t stand up all the way, he was hunched over, and there was a blanket over the cage. He was completely isolated,” said Jasmine O’Keefe, Animal Services Manager at LCAC.

The dog was a one-year-old male German Shepherd mix—the staff named him Oreo. It was clear he'd had very little human interaction and was frightened. It took Jasmine and two other employees 90 minutes just to get a collar and leash on him. “He was our first dog with really intense behavioral issues. Anything new or unfamiliar would set him off, and I knew it would take someone advocating for him to give him a chance at rehabilitation.”

That’s when Julie Hoover, an Animal Technician at LCAC, stepped in.

“I noticed nobody wanted to take him out and knew he couldn’t live in a cage forever,” said Julie. However, her first interaction with Oreo wasn’t exactly an easy one. “I was told to give him wormer and didn’t know how aggressive he was. He almost bit my face off,” she recalled with a fond laugh. “After that I started sitting in front of his cage three to four times a day, feeding him hot dogs.” Julie wanted Oreo to understand he didn’t need to be fearful of her. “I had to win his trust.” 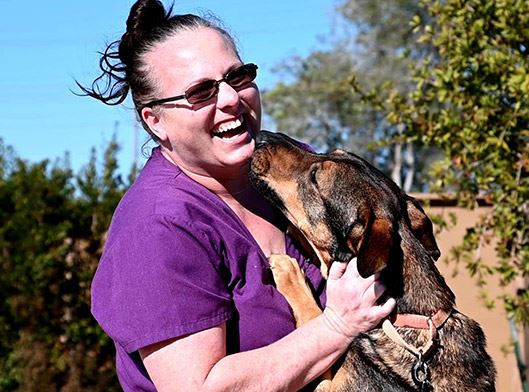 Julie watched YouTube videos by animal training experts to get advice on how to help Oreo. She spent time with him every day, hoping that her efforts would pay off. A glimmer of hope shined through after four weeks of sitting beside his cage. Oreo let Julie pet him. “I cried the first time he let me touch him.”

From target stick training, to walks, to even taking him home with her, Julie continued to work with Oreo. “He’s very smart. He picked up 'shake' in a minute. He really wants to please and be good,” she said. Julie also emailed Sonya Fitzpatrick, a pet psychic who at one time had her own show on Animal Planet. “I was trying to figure out why he would be so aggressive, so I emailed her a picture and video, and explained that he’d been here a long time.” The email worked, and Sonya actually called Julie to offer her a free reading on Oreo.

Following a strict training schedule for months on end, Oreo began to make some major improvements. He let other volunteers work with him, something that had previously been impossible. Then one day, someone came to the shelter expressing interest in adopting him.

“I was shocked someone was here to adopt,” Jasmine said. “Then I was afraid. I wasn’t sure the potential adopter really understood that Oreo has special needs.”

It turned out Jasmine had nothing to fear. Ray Dixon came to League City Animal Care on several occasions to spend time with Oreo. He learned how to handle him and understood the challenges involved with caring for him. Finally, after 16 months living at the shelter, Oreo left for his forever home on March 2, 2021. Jasmine attributes Oreo’s happily ever after to the time Julie and the staff committed to training and caring for him.

“We have a lot of animals in the shelter to allocate time to. Julie made time to work with Oreo—even on her days off— 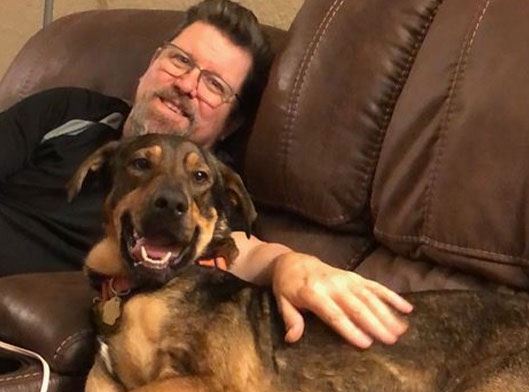 and that made the difference,” said Jasmine.

Now Oreo goes by the name of Brody and spends his days in the comfort of his new home, with Ray. “I’m a little piece of a very big story,” said Ray. “I know a lot of hard work and love went into this guy, and I’m reaping that reward. He’s my best friend.” Brody now spends his days keeping Ray company and playing outside. Oh, and there’s no longer a tiny crate keeping him confined. “He sleeps next to me, stretched out in his spot. His cold wet nose is my alarm clock.”

The future is bright for League City Animal Care

Jasmine and the League City Animal Care staff learned a lot from their time spent with Oreo, and even had help from animal care experts across the country. Tucker Eurman—a professional canine trainer out of Colorado—created Oreo’s training plan, including the target stick training that Julie implemented. “This experience raises the bar for us. We know that we can work successfully with these animals. When another Oreo comes along, we’ll be prepared, and we know who we can reach out to for help.”

Having an exceptional team in place—from shelter staff to volunteers— enabled Jasmine, Julie, and other employees to rehabilitate Oreo to the point where he could be safely adopted. “I’m beyond proud and grateful for the staff and volunteers. I can’t ask for a better team. We have so much potential, and I can’t even say with words how proud I am.”

How can I help?

Watch Oreo's story in the video below: