I’m so excited because it’s fall, y’all! This is my favorite time of the year to go birding – not only is it cooler and much more pleasant to be outside, but it’s easier to spot birds with less foliage in the trees, and there’s a greater variety of species to see. Fall migration is in full swing, and every cold front brings with it more birds from the North to overwinter here, where resources are more plentiful. Here are a few tips on how you can use behavior to identify some of my favorite species of birds, all of which you can see only during fall and winter in the League City area. Check out this month’s video to see these behaviors in action!

One of the first species of raptors to arrive in fall is the Osprey, once known as the Fish Hawk because fish are its primary prey. It can be confused with the Bald Eagle due to its plumage coloration of dark brown and white, but it has a much different flight pattern. Watch for it flying over fresh- or saltwater and hovering briefly with a distinctive “M” shape to its wings, before plunging downward with talons extended to capture its prey. Once it has a fish in its grasp, it carries it facing headfirst as it flies, then lands somewhere nearby to feast.

Another species that loves fish and arrives at the same time as the Osprey is the Belted Kingfisher. With its shaggy crest, dagger-shaped beak, and loud rolling rattle calls, it’s hard to miss! Look for it perched near fresh- or saltwater, pumping its tail as it searches for prey, then flying up with a flash of wings to hover in the air before diving headfirst to catch fish in its bill. 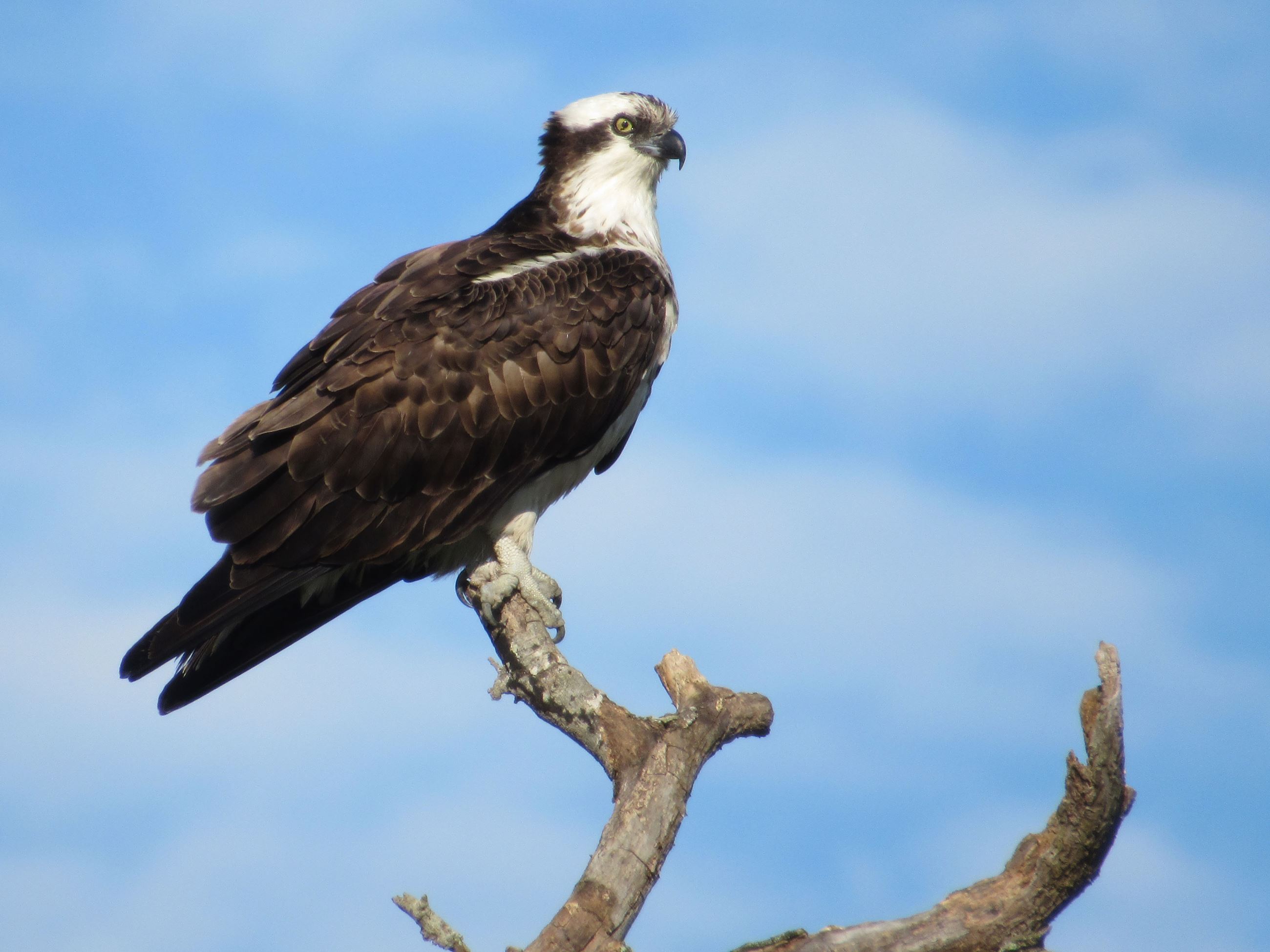 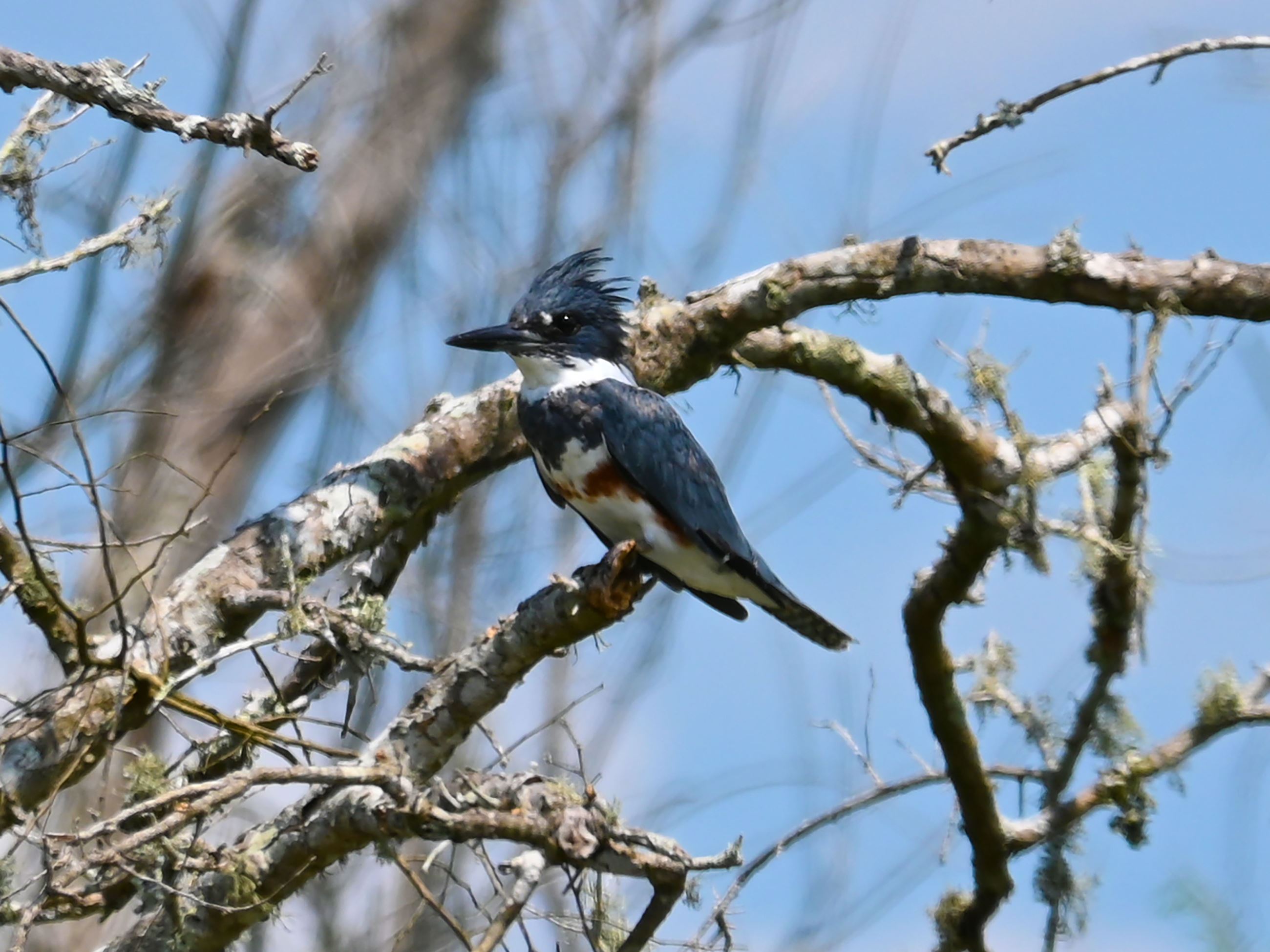 The American White Pelican loves fish too, and it will soon be arriving here in great numbers! Keep an eye out for their large flocks circling silently overhead, recognized by the unique visual pattern where they seem to disappear and then reappear each time the light hits their wings. Unlike our resident Brown Pelican that dives for fish, this species forages by scooping fish out of the water in its huge pouch, and sometimes works together to “herd” schools of fish into range. 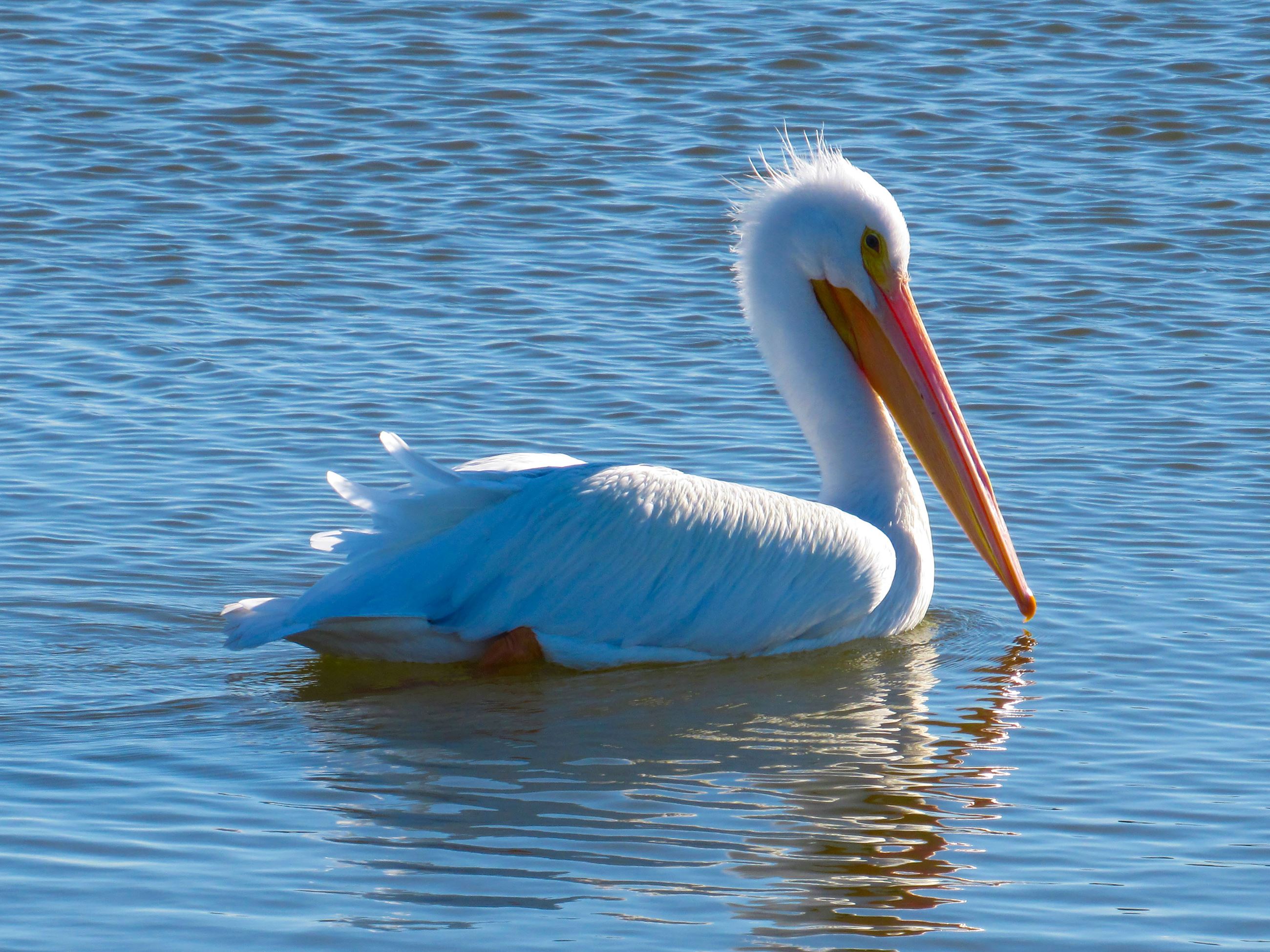 Now let’s look at a water bird that doesn’t eat fish – the Northern Shoveler. This beautiful surface-feeding or dabbling duck forages in shallow fresh- and saltwater wetlands for aquatic plants and invertebrates such as crustaceans. Although the male is often misidentified as a Mallard due to its iridescent green head, one look at the giant schnoz of a bill that gives this species its name will clear up any confusion. Watch for its distinctive foraging behavior in which the male and female swim in a pinwheel pattern, with heads down and tails up, working together to stir up food.

Our final species is not a water bird; it’s a small, ground-feeding songbird that is often mistaken for a sparrow – the American Pipit. This plain-looking bird has a thin bill, light streaking on its sides, and white on either side of its tail. It can be difficult to see due to its habit of foraging low to the ground. Look carefully for it in open areas with well-mown grass or agricultural fields, foraging for insects and their larvae. One way to tell it from a sparrow is that it walks rather than hops, and constantly wags its tail. 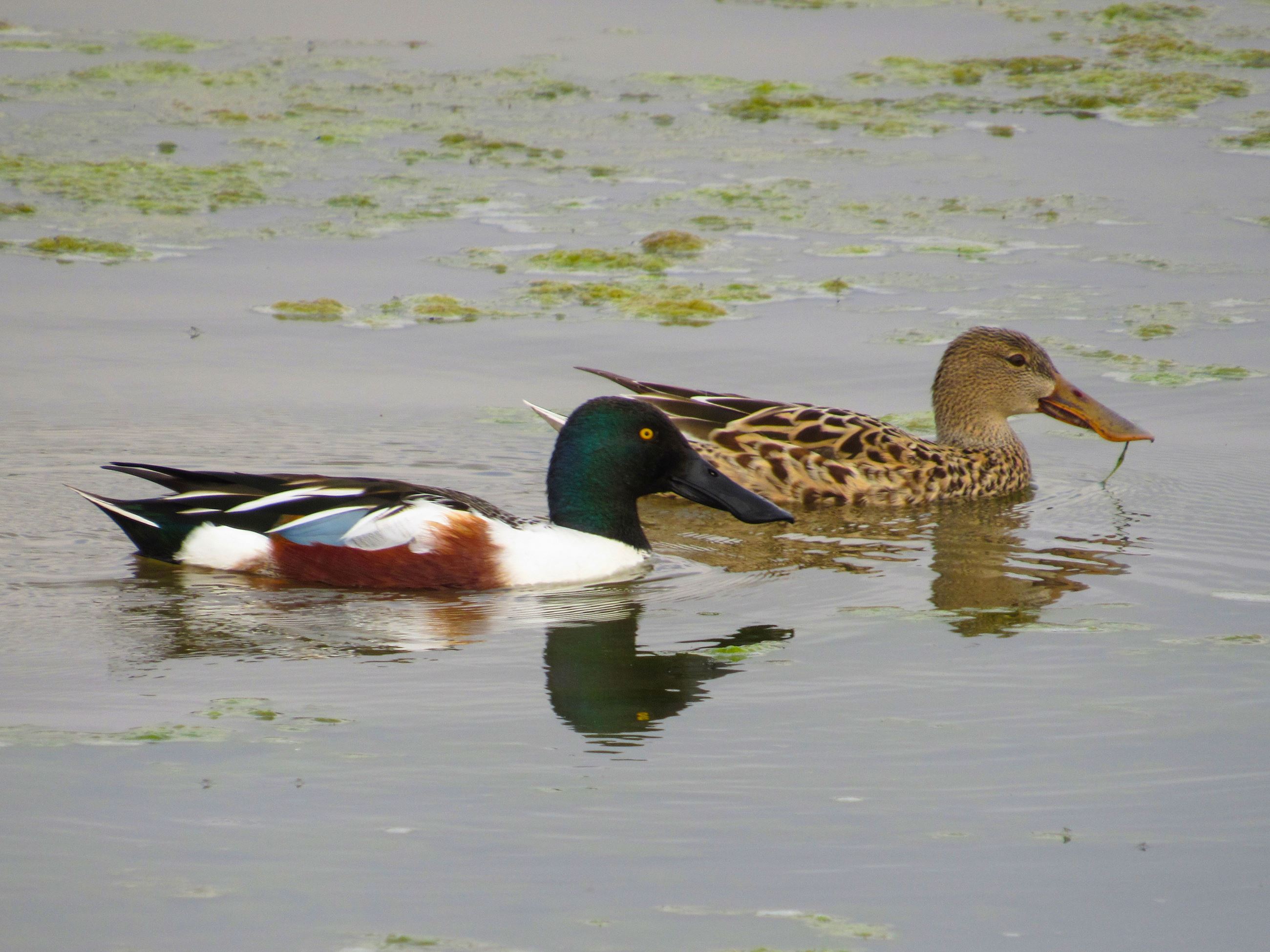 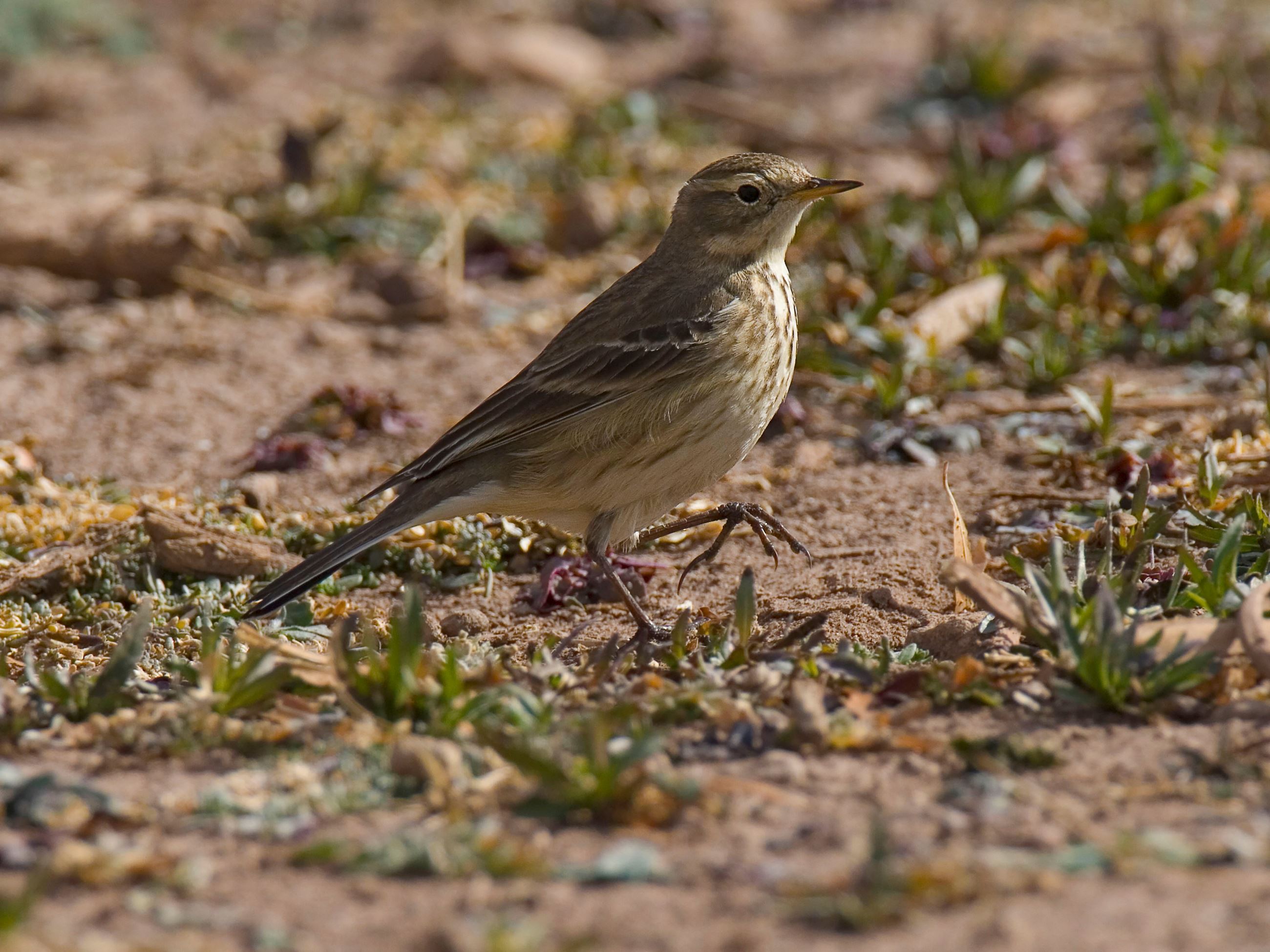 I hope this piques your interest about fall birding – there’s so much more to see! If you’d like to get out and explore a little, join me for our final bird walks of the fall season at Challenger 7 Memorial Park on Saturday, November 6th. You can choose from morning or afternoon walks, but participation is limited, so sign up soon at League City CVB.

Hope to see you soon!